Dunster Yarn Market, a Jacobean cross market on Dunster High Street is located at the opposite end from Dunster Castle. The Yarn Market, a striking octagonal structure measuring over 9 metres in diameter, is located on Dunster High Street. The structure is supported by a large central pier that has a massive timber frame and rests on a low stone wall.

The Yarn Market floor is made of cobbled stones. It has a slate roof that houses a wooden lantern and a central wooden lantern. The weathervane, dated 1647, is located above the lantern.

Each of the eight sides have mullioned windows in the gables that allow light to enter the market. Prospective customers can inspect the cloth for sale from a distance that is well beyond the support posts.
To provide shelter for merchants at Dunster’s regular market, the Yarn Market was established in 1609 by George Luttrell, Dunster Castle. Dunster was an active centre for wool trading. Shepherds brought wool fleeces from Exmoor to Dunster.

This building was used to sell Dunster cloth and Kerseymere. It was woven from long wool, and is often ribbed. The Dunster cloth trade was so important that an Act of Parliament was adopted in 1607 to regulate how the kersey cloth known as ‘Dunsters’ could be made. 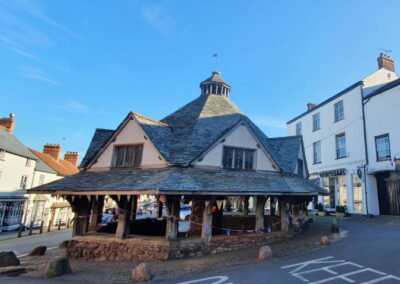