Butter Cross in Dunster is a Grade II listed building and ancient monument. It is said that the cross was originally erected either in the late 14th or early 15th century in the High Street and was moved to its current site in the late 18th or in the early 19th century.

The name “Buttercross” originates from the location in market places, where people from neighbouring villages would gather around the market cross to purchase locally produced products. The fresh food would be laid out on the stepped bases of the cross.

The Cross originally stood in the High Street, possibly at the southern end of the high street, near the Yarn Market, the head of the cross is missing, although the shaft and socket stone are original.

It was moved to its current location on St George’s Street just on the edge of the village, although the date when this was done is not clear. 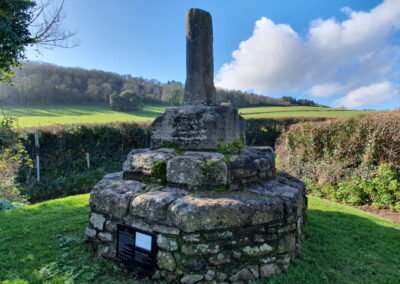