Conygar Tower in Dunster has been designated as a grade 2 listed building and was built in 1775, it is a circular 3 storey folly tower built out of red sandstone and is situated on a hill overlooking Dunster village.

It was commissioned by Henry Luttrell and was designed by Richard Phelps. It stands about 18 metres (or 59ft) so that it can be seen from Dunster Castle on the opposite hillside. There is no evidence to suggest that it ever had floors or a roof.

The name “Conygar” comes from two medieval words; Coney meaning rabbit and Garth meaning garden, indicating that it was once could have been a warren where rabbits were bred for food.

In 1997 a survey was carried out by The Crown Estate had identified cracks in the walls which were repaired in 2000. 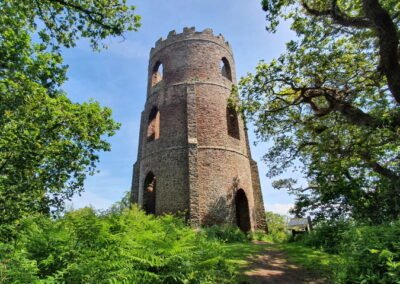